As part of a potential project, a friend sent me a link to a map that shows areas where the Federal Communications Commission (FCC) is incentivizing (subsidizing?) telecom companies to build out additional broadband infrastructure. At least I think that's what the map is showing.

As the map's legend indicates, the green splotches are areas where funding was accepted. The goal was to get the data behind the map tiles. The project didn't end up going anywhere but I was still curious about this data. The discussion I had didn't define what questions needed to be answered. Maybe we needed to know where there were CAF areas larger than 10 square miles. Or with a population over a certain threshold. Or within a certain distance to some existing infrastructure. These are questions that are much easier to answer, and answer accurately, if a vector form of a dataset is available as opposed to a set of images of the data.

After a few dead ends, I ended up on a "Price Cap Resources" page with a "List of Census Blocks Funded by Final Connect America Cost Model" link to download a file named CAM43_Supported_Locations.zip. It's a couple megabytes zipped and ~40MB unzipped. The .csv has a column named "CB" which I assumed meant census block.

The .csv has about 750k rows. Considering there are about 11 million census blocks, it seemed plausible that all the green on the aforelinked map corresponded to the ~750k block IDs in the .csv.

Now that I had a clear line of sight to source of the splotches, I came up with a plan:

At this point, I thought "smooth sailing from here!" Which was immediately followed by "that probably means the real problems are about to start." Pessimistic? A product of experience? Whatever, onward.

Step one was indeed easy enough thanks to a Census Bureau FTP server. Specifically, http://ftp2.census.gov/geo/tiger/TIGER2016/TABBLOCK/. There's a .zip for each state/territory. Altogether the .zip files come in just over seven GB (and took a couple attempts to download because my connection is flaky, or the FTP server is underpowered, or both).

Step two also didn't pose any major problems. Since there's a shapefile per state, I decided to process one state at a time rather than combining everything and trying to work with a USA-sized dataset. I split the .csv with the aptly named csv-split node module, which is something I wrote about when I was initially pondering pursuing this little data munging project.

With a .csv for each state, I was at a crossroads. When I started this, I tentatively told myself I'd prefer to avoid writing code beyond a shell script to do this processing. I struggled through some awk for step two before settling on a command line-based node module. Once I got to step three, I didn't want to fight through some combination of sed, awk and bash to read a .csv then build a where clause-like string for ogr2ogr to create a new shapefile. There was also the fact that the .csv files were named with two-letter state abbreviations while the zipped shapefiles used FIPS/ANSI codes. The idea of matching one to the other in bash was too much. So I started a node script to do the work.

To accomplish step three, I used csv-parse to read .csv files and plain JS to pull out the values from the column with the block ID. Here's a slightly simplified version of the code I ended up using:

One point to call out from the chunk above is the pattern of recursively calling a function to process items in serial. I find myself doing this a lot (and I used it a couple more times for other parts of this project) because it fits in my brain nicely and it works. This is slower than ripping through matches with a forEach. Since there's some async file I/O in readCsv, I don't want to try to read all the files concurrently and (potentially) overwhelm my machine. Plus, this way, I've got an example of recursion that isn't a fibonacci sequence generator.

With code to pull the relevant info from the pile of .csv files, I moved on to thinking about those census blocks. As I already mentioned, the files from the Census Bureau have FIPS codes in their names while the .csv file used two letter state abbreviations. This wasn't a step in the initial plan, but I needed to make a lookup table to go from state abbreviation to FIPS code. Here's what I did:

That last line, copy(lookup), is still one of my favorite dev tools tips.

Now that I had a simple state abbreviation to FIPS code lookup, which is read this way:

I could get back to step four. And since I was already off the shell script-only wagon, I kept writing javascript.

I knew that ogr2ogr could handle receiving a list of block IDs and output a new shapefile but I didn't know how to call it from node. Enter child-process, specifically child-process.exec().

After a little experimenting with child-process.exec(), as well as unzip, I felt like I was pretty close to firing off a script and generating one shapefile per state with census blocks of interest. I was wrong.

First up was Error: spawn E2BIG. One quick search and it's clear that the ogr2ogr command being generated was too big. How long is too long for a single command, anyway? Running getconf ARG_MAX in my terminal tells me 262,144. So I was doing something that was creating a command that was more than a quarter million characters long. At one point I logged the length of the generated commands instead of trying to execute them. The only product of that exercise was me feeling shame. I clearly needed to break things up.

There is a comment about blockIdBatches in the code block for reading .csv files. The blockIdBatches variable is used to keep track of chunks of block IDs so that later commands can be generated that will come in below the length limit defined by ARG_MAX. In other words, block IDs for a state had to be split into smaller chunks.

Here is the complete readCsv() function (blockIds is a global):

All the csv files are read, the block IDs of interest are stored in an object so the next thing was to start cranking through batches of IDs and creating new shapefiles.

In the final script that does all the processing, the else branch in checkTotalCsvsProcessed() calls a function boringly named filterCensusBlocks(). Here's what that looks like:

There's a lot happening, and it should probably be refactored. I added comments to help navigate all the nested code. The part to focus on is the usage of recursion I mentioned once already. There are two more instances: one when tracking if there are more shapefiles to unzip and again when processing batches of census block IDs to pull out of state-level census block shapefiles. There's also some clean up happening once processing of a state's census blocks finished via rimraf to delete the original shapefile with all census blocks for a state.

At this point in the process, there is a directory of shapefiles that, collectively, make up all the block IDs from the FCC .csv. Success? Partially! In that initial plan, I said "create a new shapefile per state" but instead I'd ended up with several shapefiles per state. Since my script was getting pretty long (more than a couple screens worth of code), I decided it was time for a new script to handle merging the shapefiles with all the batches.

I again used state-fips.json to get a list of state abbreviations. For each state, glob creates a list of shapefiles that have batches of census blocks. ogr2ogr is used again to merge all shapefiles for a state. For the umpteenth time, the pattern of recursively processing states until all the work is done is used. Here's the code:

With that, step four is in the bag. The filtered-merged folder has one shapefile per state with only the census blocks from the FCC .csv. Total size on disk for all the new shapefiles is about a gig and a half.

It wasn't much more effort to merge everything into a single shapefile:

Since this is a simpler task, I could have saved myself a little time and merged everything with bash but I already had a bunch of javascript, why not a little more.

Now there is a single 1.5 GB shapefile on disk with about 750K features. Time for some spot checking to see if all this work had the desired result.

I compared several several locations on the FCC map and my final shapefile. Below are screen shots of a few areas. FCC stuff on the left, same areas in the final shapefile I created on the right. 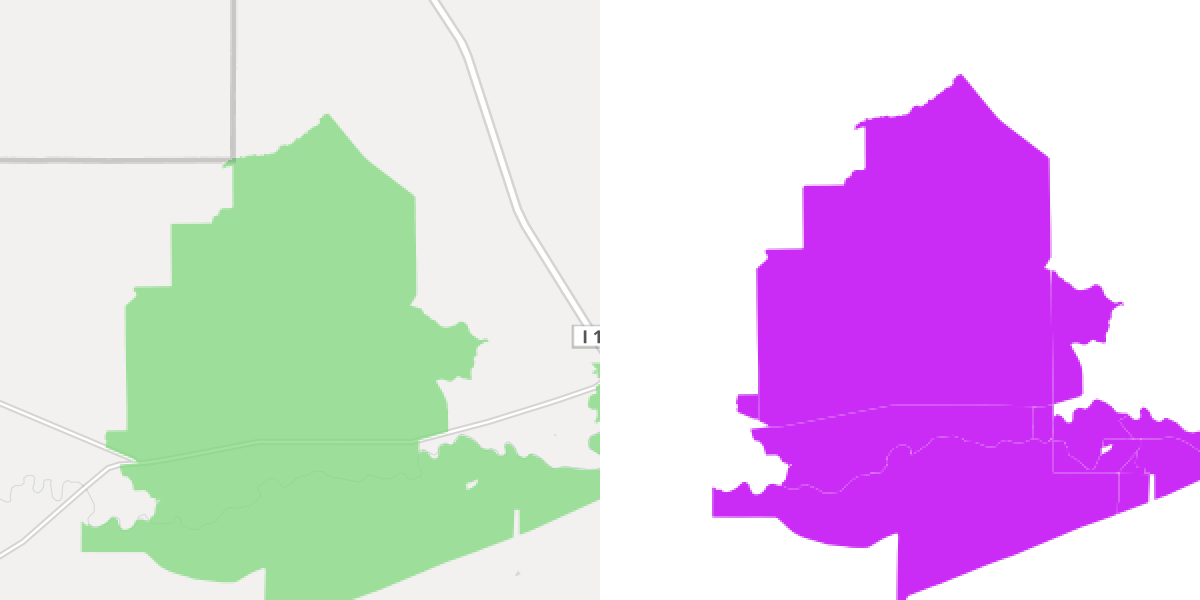 Some of Newton County, Mississippi:

An area around Eden, VT: 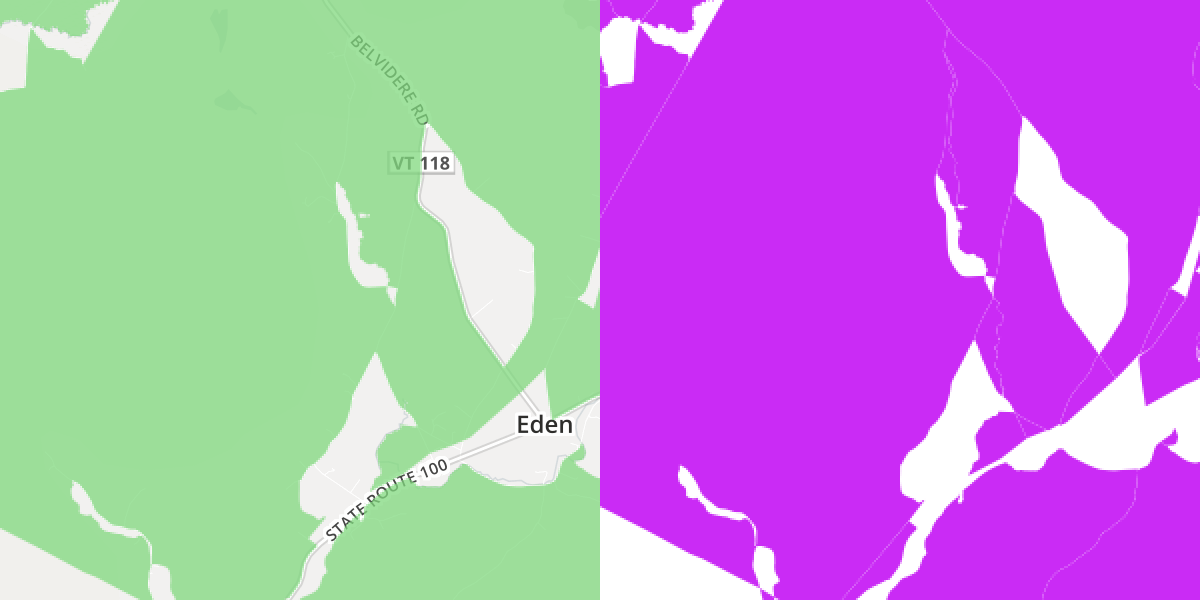 I don't know of a quick or free (would also consider cheap!) way to publish a 1.5 GB shapefile in an interactive map. Since I have all those state-level files, I decided to convert one of the smaller ones, Nevada, to GeoJSON and drop it into geojson.io. Poke at the features either on bl.ocks.org or gist.github.com. I'll give myself partial credit on step six.

It's worth noting that not a single step went off without a hitch. To recap:

Other things to mention:

There's probably an opportunity to make something that simplifies some or all of this process but it's probably not going to be me that creates it. This feels too niche to generalize and each project will always have some custom data wrangling. There are already heavy apps with very clicky GUIs that can do this work but I don't like them (many reasons, primarily that it takes too much discipline to maintain an accurate record of a process). One alternative that probably makes all of this more efficient: put everything in a spatial db, write one statement to pull 750k rows out of a table with millions then export to your preferred interchange format. Sounds easy enough...

USA Today obtained of and published some quality ratings for Veterans Affairs medical centers. The article includes a searchable…

Weather forecasts from weather.gov as JSON